It was a hot summer day, the 27th of July 1880 when the British decided to launch an offensive against the Afghans for the

It was a hot summer day, the 27th of July 1880 when the British decided to launch an offensive against the Afghans for the second time. The British had not forgotten the humiliating defeat of the first Anglo-Afghan War. This time they had set up with new strategies, manoeuvres, machineries and a better understanding of the topography of the battlefield. The 66th Regiment of the British Army led by General Burrows battled against the army of the Afghan leader Ghazi Ayub Khan. They fought each other at Maiwand which is located 45 miles northwest of Kandahar.

Ghazi Muhammad Ayub Khan, born in 1857, was also known as The Afghan Prince Charlie. He was, for a while, the governor of Herat province in Afghanistan. He was the son of Amir Sher Ali who ruled Afghanistan from 1863 to 1878. He is remembered as a national hero for his bravery during the Battle of Maiwand where the Afghans emerged victorious against the British Army. Under his command, the Afghan forces not only successfully fought against the British troops in the field but also outplayed them in the game of wits. It was a battle between two ideologies; the divide and rule policy of the British in Afghanistan and the fierce pride and will of the Afghans to be ruled by the one they choose. The spirit of the Afghans was spurred on by the conspiracies of the British to install a puppet ruler onto Afghanistan to further their own interests in the region and to gain a territorial advantage over Russia.

After the victory at the Battle of Maiwand, Ayub Khan was defeated by the joint forces of General Robert and Emir Abdurrahman at the Battle of Kandahar which took place a month later on 1st September, 1880. He unsuccessfully tried to get his power back, fled to Persia where he was fraudulently arrested and handed over to the British. He was kept in India where he died in April, 1914. He was buried in Shaikh Habib baba graveyard, Wazir bagh in Peshawar as desired by him before his death. His shrine is almost unknown to Pakistani Afghans and was once desecrated by thieves.

Afghan commanders after their victory at the Battle of Maiwand

Malalai of Maiwand, born in 1861 in a village called Khig, is another unforgettable hero of this battle. She was there to help tend to the wounded and provide water and spare weapons. According to local sources, this was also supposed to be her wedding day and as one flag bearer fell wounded, Malalai raised the flag during the battle. She also chanted the famous Pushto verse to encourage the soldiers. 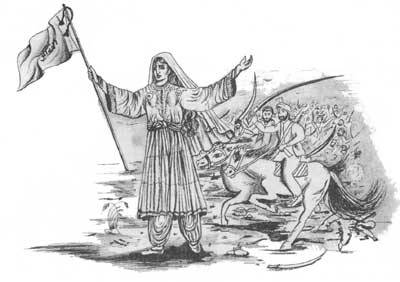 (If you do not taste of martyrdom today on this field of Maiwand By God, I am afraid you’ll lead an ignominious life forever.)

Malalai has forever been epitomised as a symbol of bravery and courage, showing that during this battle not only the Afghan men but also the women took part in protecting their homeland.

An Iron Lion statue in the memories of the men of 66th Regiment of foot who died at Maiwand was built in Forbury Garden, Reading in Berkshire England. The few remaining survivors that managed to reach the safety of the British Garrison were awarded Medal of Queen Victoria on return to their country. One of the recipients of the Medals was a dog named Bobbie.

For a country like Afghanistan history never remains just history since it is repeating itself in the 21st Century. What will be the status of Afghanistan after NATO forces leave? Would it forever be shrouded in misery and chaos or would the world not turn a blind eye towards its suffering and help it back on its feet? Would world powers ever again dare to invade Afghanistan and create an atmosphere of uncertainty?