The participants of the 10th annual Vintage Classic Cars Rally 2019 continued its journey towards the Quaid-e-Azam Mausoleum, the last destination

The participants of the 10th annual Vintage Classic Cars Rally 2019 continued its journey towards the Quaid-e-Azam Mausoleum, the last destination in the port city of Karachi, after a colourful function and a grand display of unique and ancient cars at the Peshawar Services Club on Sunday.

The rally, jointly organised by the Tourism Corporation Khyber Pakhtunkhwa (TCKP), Classic Land Rover and Heritage Motoring Club of Pakistan, started from the Pak-Afghan border at Torkham on Saturday.

The enthusiasts of vintage classic cars from across the country, including Karachi, Lahore, Peshawar and Islamabad reached the cantonment in Landikotal and kicked off the rally after being served refreshments at the Khyber Rifles Mess.

Provincial Minister for Forest and Environment Ishtiaq Urmar inaugurated the vintage classic cars show at the Peshawar Services Club as chief guest and later saw off the participants at a colourful ceremony for their onward journey towards Islamabad and Karachi. Tourism Secretary Kamran Rehman, Classic Land Rover CEO Asim Durrani, officials and a large number of spectators were present.

Speaking on the occasion, Ishtiaq Urmar said that organising the unique cars show was a good omen for the residents of the city and other visitors as it would send a positive message to the world about the peaceful environment in the province. He said that launching the 10th annual Vintage Classic Car Rally 2019 from Khyber district was aimed at highlighting the importance of scenic places and tourism potential in the merged districts to lure more tourists to the serene sites.

In the past, the annual Vintage Classic Car Rally would started from Karachi and conclude in Peshawar, but this time the rally kicked off from Khyber district to highlight the significance of the merged areas and its tourist attractions.

Giving details about the participating cars, Classic Land Rover CEO Asim Durrani said that cars and jeeps manufactured between 1940 and 1970 are part of the rally.

Published in The News 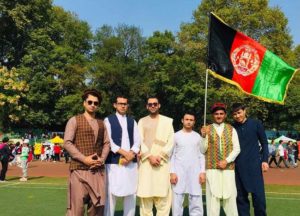